Showing posts from October, 2013
Show all

- October 28, 2013
Last Thursday we took the Shapeoko 2 out to Chicago hackerspace Pumping Station: One for their CNC Build Club weekly meeting. This particular group is a well-accomplished bunch, having previously built a working delta 3D printer in a single evening. It was up and chugging along on a print when I arrived: The club is a good mix of experienced folks who've built their own machines and like to share designs and experiment, and beginners looking to learn more about CNC in general. Plus drop-ins from PS1 members who were curious. We demonstrated two jobs- the first was a "Hello Shapeoko 2" design we worked out to quickly show the machine working. The second was an experimental attempt to mill a piece of Corian. Both worked! You have to run the Corian a lot slower so it took a little while, but the end result was quite nice. We're working on planning some visits to other Makerspaces in the near future. If you'd like us to come by and demo
Post a Comment
Read more 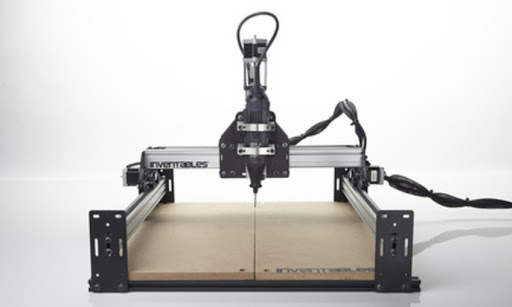 We're excited to announce the release of Shapeoko 2! For those just hearing about it, Shapeoko 2 is a low-cost desktop milling kit that lets you carve woods, plastics, and soft metals with precision. Five years ago, Edward Ford had a notion to design an open-source CNC kit that anyone could build. He worked on his designs in his garage and eventually got something together that he felt worthy of sharing with the world. In June 2011 Edward launched a Kickstarter campaign with a modest goal of $1500 to fund the production of about 10 kits, and the response was overwhelming. Edward partnered with Inventables to help fulfill orders and over a thousand kits were sold, making Shapeoko the world's fastest selling CNC machine ever. Since the first Shapeoko release, Edward and the open-source community have been experimenting and improving every aspect of the design. Those upgrades have all been rolled into this new version and it's the best one yet- bigger, stronger,
46 comments
Read more

Easy Papercraft with the Silhouette Cameo

When the Silhouette Cameo  cutting machine arrived a while back, some of us hard core DIY CNC people at Inventables gave it a wary glance.  Within a few days we all quickly fell in love with it.  It is so versatile, so easy to use and it just plain works.  The projects are quick, fun and look great. One of the features I quickly latched onto was the recognition marks feature.  If you have a full color image, the software can add registration marks and send it to your color printer.  The Cameo can then see those registration marks and accurately align cuts on that print. I immediately thought of papercraft .  Papercraft is making 3D objects out of paper.  Typically you print the image on your printer, cut it out and then fold it into the final object.  Some of them have very complex shapes to cut out.  This can take a lot of time and cutting skill.  It is beyond many children who are otherwise very fond of papercraft. The Cameo can do a lot of the work for you.  If you load imag
1 comment
Read more

Manufacturing for a Small Planet

- October 15, 2013
The third industrial revolution is in full swing. And as the CEO of  Inventables , I have a front row seat. The first industrial revolution is easiest to understand by thinking of Eli Whitney and the cotton gin. It was all about economic growth driven by transforming human labor to machine labor. The second industrial revolution is easiest to understand by thinking of Henry Ford and the assembly line. Henry pithily summed this up when he told customers they could choose any color for the Model T – as long as it was black. The assembly line made it efficient to get a single product out to the masses. The third industrial revolution– characterized by the digitization of work and manufacturing – is about the conversion from analog tools to digital tools. The computer has been critical in this transformation, and after decades of work, we now have low-cost digital manufacturing tools that plug into the computer. Digital manufacturing tools take files designed on a computer and rende
Post a Comment
Read more
More posts