A few weeks ago a good friend of mine brought his Shapeoko over to my house.  He was in the process of assembling of getting it wired up with a Rambo (reprap electronics).  In the process, I noticed that the Y-axis was driven only on a single side and suggested we should change it.  Stacey mentioned a kit was available, but we decided we would try to hack one out.  The result came out nicely as you can see.  I’ll walk you through the process of what we did. 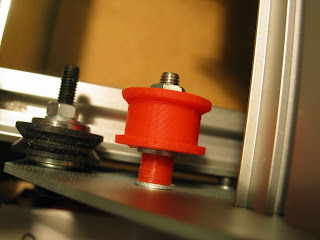 A lot of the pieces were already on hand.  We needed the following:

As we looked through what was needed, we had many of the necessary parts from reprap projects. The key pieces we didn’t have were the idler and the spacer.

Rather than try to create the idler from scratch, I went to thingiverse to see what might be available.  After going through a few entries, I found this one: (http://www.thingiverse.com/thing:5620) .  It was very close to what I needed, but of course the parameters would need to be adjusted.

The STL and the resulting print. 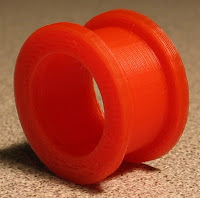 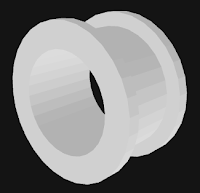 Next we needed to press fit the 605 bearing into it.  I used a regular vice in a similar fashion to press fitting into metal.  The result compared to the idler on the other side 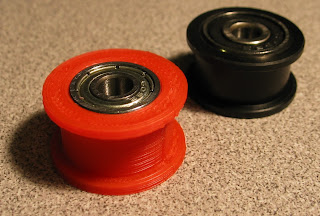 The idler came out a little bit longer because of the flange in the model, but still good enough to work.  Next I conjured up a spacer model that we could print to get the belt path alignment right.  For all of these parts I used 50% infill for strength.

The motor just needed the 4 m3x10 shcs.  To make the two sides consistent, we swapped the belt and pulley on the other side as well.  This meant 20 tooth gt2 rather than the 18 tooth mxl pulley/belt combo. The gt2 belt dropped right in the other side with no issues.

There wasn’t much else to it.  After mounting up the belts, we were able to do a number of dry runs and they all worked well.