- April 20, 2011
This afternoon we were working on a new feature and all of a sudden we noticed our traffic spiked. Typically when this happens we investigate to determine the source and discovered that the article Bryan Gardiner wrote about Inventables for the new iPad newspaper "The Daily" was just published.

These days when a newspaper does an article about a company it is rare that the company would see a spike in their traffic because obviously you can't click on a traditional print newspaper and fewer young people subscribe to the newspaper. 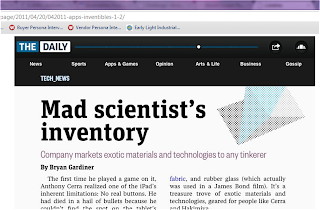 But had the added benefits of being interactive so they had a slideshow of our materials and could link out to our site and videos. 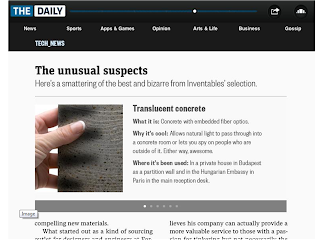 The Daily cost is 99 cents a week or $39 a year. There is so much free content on the web so it will be interesting to see how they differentiate and earn that 99 cents each week. Maybe this model will be the foundation that funds a new generation of journalists or maybe it will be an iteration that leads to a new model. Only time will tell but it feels like we are living in the future now that newspapers are delivered to electronic screens. Maybe instead of getting a paper route as a kid you'll become a programmer and hack together an iPad app.

fishead said…
crud. now the secret is out. there go all the neat trick's I've been impressing my customers with. oh well.