- November 23, 2010
Last Saturday was the 8th annual DIY Trunk Show, an oversized craft fair showcasing a wide variety of work from Chicago artisans, from home-made yarn to local magazines. The event filled up two rooms of the Pulaski Park auditorium, and felt like a flea market's prideful sibling.

New uses for old materials
Much of the most interesting work displayed involved finding novel uses for well-known materials. One artists would cut rocks into thin slabs that could be used as drink coasters, or reassembled into their original formation. There were bottlecaps turned into magnetic art, jewelry made from junk, notebooks made from scrap leather. 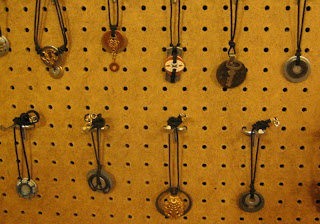 It evoked a certain kind of wonder to see materials used outside their traditional uses, reflected a certain kind of openness, a willingness to understand the actual properties of a material, rather than fall back upon its common understanding. This tendency stands at the center of much invention: one must often separate a material from its normal uses. Petroleum was used for light for thousands of years before it was used for heat, and then it was decades more until it was also used to generate plastics.
Bringing producer and consumer together
One of the booths that most struck me was a booth selling jewelry advertised as "Powder-Coated Steel Jewelry", almost reading like an Inventables product headline. 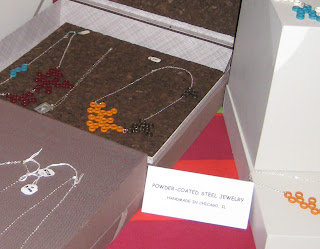 When I asked the seller for an explanation, she eagerly explained how the metal was charged to attract ionized colored powder, evenly coating the jewelry it before it was baked on. The method itself was nothing new, but it was fascinating to have the process emphasized over the product. If this same jewelry was sold at a mall, their tagline would read something like "colored steel jewelry".

You could see this throughout the Trunk Show. Everyone was eager to talk about the way their craft was made, was eager to advertise the origins of their creation. In most of the modern marketplace, the consumer is heavily removed from the product. We rarely understand how something works, moreover how something was made. R&D is a distant, mysterious realm of thick glasses and tesla coils.

While we may not be selling cat sweaters, the DIY Trunk Show was an engaging showcase of the exact kind of spirit we hope to help evoke.