- March 29, 2010
Today we have the guys from RothMobot come in to teach us a bit about hacking toys. They have hacked toys into instruments in an art they called "circuit bending". We opened up an old Fisher-Price toy that had been thrown away and started doing some mods. 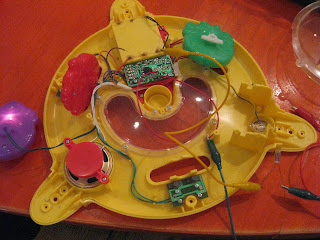 They brought a bag of photocells to mess around with. 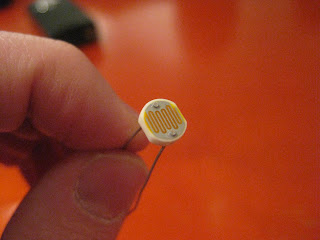 There are two cool things that we were able to do with them. They become a really cool proximity switch. You can use your hand to adjust the sound, speed, and intensity of the song that plays when you turn on the toy.


When you combine the Cadmium Sulfide photocell with an LED wrap them in electrical tape and epoxy you can make a homemade Vactrol. This is cool because it optically couples the the electronics with the switch. Optical coupling is cool because it is a fancy way of saying you can turn on and off the electronics by turning on and off a light. The LED and the photo sensor are encased in epoxy so all the light from the LED goes directly into the cell turning it on. This is interesting because there is no chance of the electronics ruining the input device (like your computer or arduino).