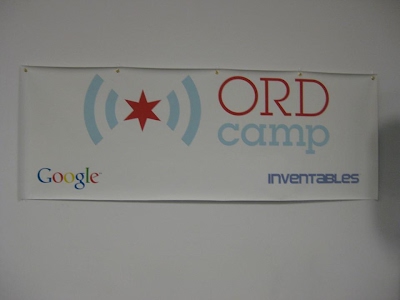 Inventables teamed up with the folks over at Google Chicago to put on ORD Camp 2010. If you're not sure what goes on engineering wise at Google Chicago you might check out the work they are doing with The Data Liberation Front. They focus on making it easier for users to move their data in and out of Google products.


We had about ~100 people doing interesting work in a wide range of technology-related disciplines, plus a handful of influential people in related areas. The event brought together the technical community in the Midwest (along with a few visitors from the coasts) to create new connections and collaborations. Inspired by Foo Camp, people demonstrated their work in fields such as web services, data visualization, open source programming, mechanical engineering, customer service, usability, computer security, hardware hacking, and other emerging technologies. There was a lot of sharing of work in progress, academic research, and even some Gypsy Jazz lessons. The one thing that all invitees had in common was that they were exceptionally passionate about what they do. We had the founder and CTO of Groupon, a guy that works on Mac OSX, a lead engineer from Twitter and much, much, more.

A few example talks included:
A history and demo of text adventure games that are now called Interactive Fiction by Ben Collins-Sussman of Google. If you're interested in reliving the days of Text Adventures on your Apple IIe or you're discovering it for the first time Ben did a nice round-up on the ORD Camp site.


Jason Huggins creator of Selenium and Sauce Labs hacked on his Arduino Orb. You can hook it up to your Selenium tests and watch it change from Red to Green when your build passes. The concept behind the ORB is it translates information or a data stream into format that conveys useful information in a glance. Check out his demo:


Lastly Jason Tillery gave a talk about the Rio Javascript Framework he extracted from Mocklinkr for developing other similar applications. The framework was also used to build Thinklinkr.

It was clear that the Chicago Engineering and Tech community is strong, vibrant, and growing. We hope that more people start to come out of the woodwork in 2011.

Check out the tweets from the event with the #ordcamp hash tag.

Anonymous said…
To be both a speaker of words and a doer of deeds.

Anonymous said…
A man is only as good as what he loves.