- December 22, 2009
You have probably used an erasable pen before and experienced problems with the ink smudging or not erasing completely. The writing above was produced with what looks like an ordinary ballpoint pen, but unlike ordinary ink it’s completely erasable with a standard eraser — and, unlike other erasable inks, this product does not smudge or smear. 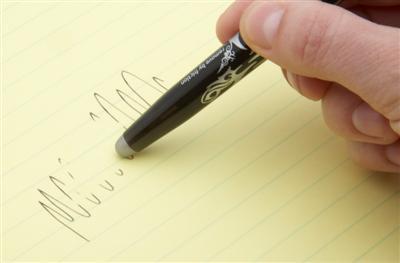 The pen looks and writes like an ordinary ballpoint pen, but it is filled with ink that changes color according to temperature and performs its magic disappearing act. The friction generated in rubbing the eraser over the paper produces heat, which causes the ink to become transparent and essentially invisible; instead of removing the ink, you change its color. You could also make such writing disappear on a larger scale using the heat from a hairdryer, and the ink can be reformulated to change colors at different temperatures.
inks materials